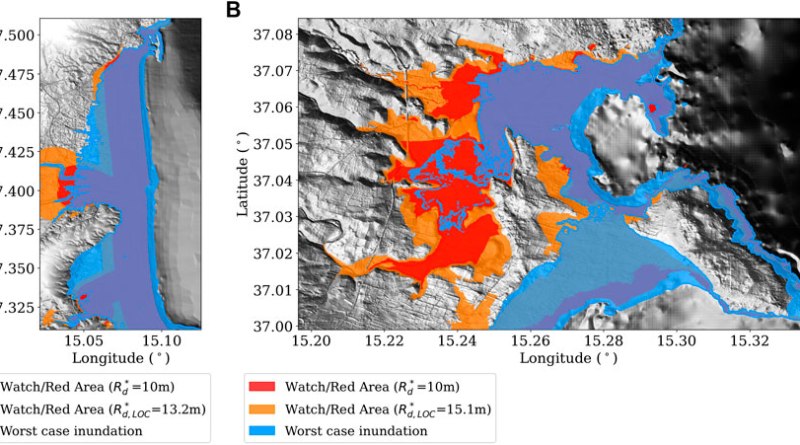 Inundation maps are a fundamental tool for coastal risk management and in particular for designing evacuation maps and evacuation planning. These in turn are a necessary component of the tsunami warning systems’ last-mile. In Italy inundation maps are informed by a probabilistic tsunami hazard model. Based on a given level of acceptable risk, Italian authorities in charge for this task recommended to consider, as design hazard intensity, the average return period of 2500 years and the 84th percentile of the hazard model uncertainty. An available, regional-scale tsunami hazard model was used that covers the entire Italian coastline. Safety factors based on analysis of run-up variability and an empirical coastal dissipation law on a digital terrain model (DTM) were applied to convert the regional hazard into the design run-up and the corresponding evacuation maps with a GIS-based approach. Since the regional hazard cannot fully capture the local-scale variability, this simplified and conservative approach is considered a viable and feasible practice to inform local coastal risk management in the absence of high-resolution hazard models. The present work is a first attempt to quantify the uncertainty stemming from such procedure. We compare the GIS-based inundation maps informed by a regional model with those obtained from a local high-resolution hazard model. Two locations on the coast of eastern Sicily were considered, and the local hazard was addressed with the same seismic model as the regional one, but using a higher-resolution DTM and massive numerical inundation calculations with the GPU-based Tsunami-HySEA nonlinear shallow water code. This study shows that the GIS-based inundation maps used for planning deal conservatively with potential hazard underestimation at the local scale, stemming from typically unmodeled uncertainties in the numerical source and tsunami evolution models. The GIS-based maps used for planning fall within the estimated “error-bar” due to such uncertainties. The analysis also demonstrates the need to develop local assessments to serve very specific risk mitigation actions to reduce the uncertainty. More in general, the presented case-studies highlight the importance to explore ways of dealing with uncertainty hidden within the high-resolution numerical inundation models, e.g., related to the crude parameterization of the bottom friction, or the inaccuracy of the DTM.