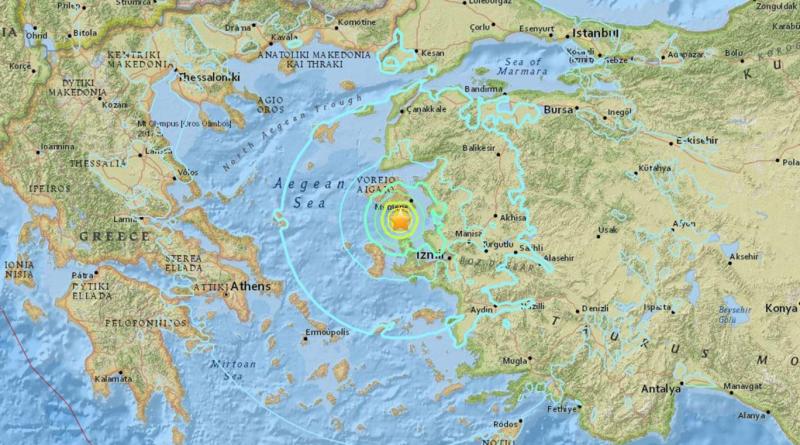 The quake was felt in Istanbul and Athens. Waves reached up to 30 cm through the land at Izmir (Turkey) coast side.

A strong magnitude 6.3 earthquake off the western coast of Turkey and between the Greek islands of Lesbos and Chinos shook buildings from the Aegean Turkish province of Izmir to the Greek capital of Athens.

The epicentre of the quake was about 84 km (52 miles) northwest of the Turkish coastal city of Izmir, the European-Mediterranean Seismological Centre (EMSC) said on its website.

Authorities in Lesbos said dozens of homes were damaged in parts of the island and some roads were closed, but there were no reports of serious injuries.

“We are advising residents in affected areas of Lesbos to remain outdoors until buildings can be inspected.” senior seismologist Efthimios Lekkas said.

Turkey’s emergency management agency said there were no reports of casualties in the country.

“The trembling was really bad. Everything in my clinic started shaking wildly, we all ran outside with the patients,” said Didem Eris, a 50-year-old dentist in Izmir’s Karsiyaka district.

“We are very used to earthquakes as people of Izmir but this one was different. I thought to myself that this time we were going to die.”

“My God, all the picture frames fell on the ground and I have no idea how I ran out. I’m scared to go inside now.”

Her sister Seval Isci, 57, was ironing at home in Izmir when the earthquake hit and left her home along with the other residents of the building when the first aftershock hit.

“We were really scared,” she said.

Social media users who said they were in western Turkey reported a strong and sustained tremor.

“We will be seeing the aftershocks of this in the coming hours, days and weeks,” said Haluk Ozener, head of Turkey’s Kandilli Observatory, noting that the aftershocks could have magnitudes of up to 5.5.

Turkey’s Disaster and Emergency Management said that the earthquake was in the Aegean Sea at a depth of seven kilometers (more than four miles) and hit at 3:28 pm (12:28 GMT).

State-run radio in Greece said hundreds of residents left buildings and waited out in the street in Lesbos’ capital, Mytilene.

More than 600 people died in October 2011 in the eastern province of Van after a quake of 7.2 magnitude and powerful aftershocks.

In 1999, two massive earthquakes killed about 20,000 people in the densely populated northwest.

Let us know about events