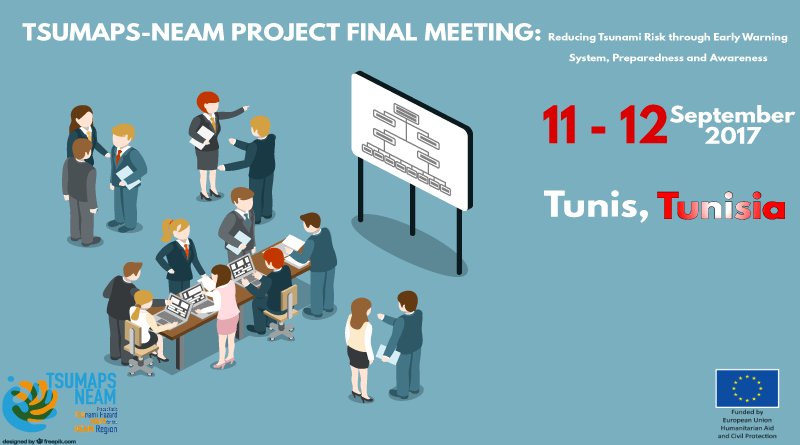 The TSUMAPS-NEAM Project Final Meeting aims to present the first homogeneous region-wide long-term Probabilistic earthquake-induced Tsunami Hazard Assessment (PTHA) for the coastlines of the NEAM region to all potential stakeholders.

To maximize the dissemination of information related to the awareness, preparedness, and mitigation of tsunami risk, the meeting is planned back-to-back with the Information Meeting on NEAMTWS (13-14 September 2017) of the Intergovernmental Oceanographic Commission of UNESCO aimed to inform about the developments of NEAMTWS, the planned Tsunami Wave Exercise – NEAMWave17 (October 2017) and the World Tsunami Awareness Day (5 November 2017).

The two meetings are organised by the Institut National de la Météorologie (INM, Tunisia) which is a partner in the TSUMAPS-NEAM project, as well as the Istituto Nazionale di Geofisica e Vulcanologia (INGV, Italy; coordinator of the TSUMAPS-NEAM project), and the Tsunami Unit of the Intergovernmental Oceanographic Commission of UNESCO.

For the TSUMAPS-NEAM Project Final Meeting

For the Information Meeting on NEAMTWS